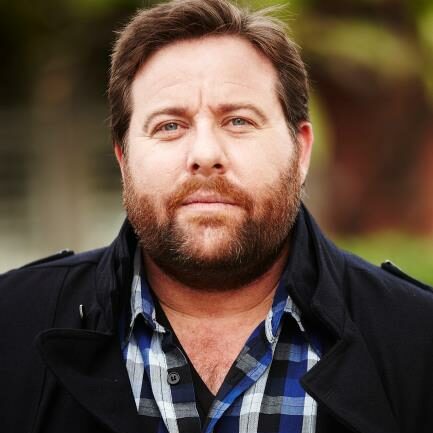 Shane Jacobson is one of Australia’s most loved, award-winning actors, presenters and entertainers. His incredible and varied career spans over 40 years both here at home and internationally.

The successful film Kenny (2006) brought Shane world-wide recognition as well as an AFI Award for best lead actor. Shane’s subsequent credits include: Cactus (2008) with Bryan Brown, Charlie & Boots (2009) with Paul Hogan, the animated Santa’s Apprentice (2010) with Delta Goodrem, Surviving Georgia (2011) with Holly Valance and Pia Miranda, Hollywood blockbuster The Bourne Legacy (2012) with Jeremy Renner, Edward Norton and Academy Award winner Rachel Weisz, the hugely popular Oddball (2015), with Sarah Snook and Deborah Mailman, The Dressmaker (2015) with Kate Winslet, Judy Davis, Liam Hemsworth and Hugo Weaving, and most recently The BBQ (2018) with Magda Szubanski, That’s Not My Dog! (2018), 7 Guardians of the Tomb (2018) with Kelsey Grammer and Brothers’ Nest (2018) with his brother Clayton Jacobson and Ladies in Black (2018) and soon to be coming to the screen with The Very Excellent Mr Dundee (Paul Hogan, John Cleese and Chevy Chase) and Never Too Late (Jack Thompson, Jacki Weaver).

Shane’s stage career has been just as successful. On stage, he has received a Helpmann Award for Best Male in a Supporting Role for ‘Nicely Nicely’ in the 2008 revival of the musical Guys and Dolls. Some of Shane’s other on-stage roles include: The Drowsy Chaperone (2010) with Geoffrey Rush, QI Live (2011) with Stephen Fry, 8 The Play (2012), Shane Warne – The Musical (2013) and Mother & Son (2014) with Noeline Brown and starred as the ‘Narrator’ in the Melbourne production of The Rocky Horror Show (2018).

As an author, Shane has penned his best-selling bio The Long Road to Overnight Success and most recently his exploration of his life as a motoring tragic in his second book, Rev Head.

Amongst this incredible body of work Shane has always found time for people and causes close to his heart. He is, or has been, the patron or ambassador for HeartKids Australia, Scouts Victoria, Indian Motorcycles, Docklands Film Studios, Polaris Offroad Vehicles, Australian Side by Side Racing Championships, HMAS Canberra, Get Reading, Entertainment Assist, The Mirabel Foundation, The Leukemia Foundation, Bowel Cancer QLD, and Parkinson’s Victoria. As a brand ambassador Shane has been promoting IGA Australia’s supermarkets and the Isuzu truck range since 2016.

As a speaker he delivers highly entertaining and engaging keynote speeches and after dinner talks about his unique life. His keynote centres around his best-selling book A Long Road to Success and talks about the quintessential Australian sense of humour and the dying art of joke and yarn telling. His Keynote is packed full of funny and memorable stories from his extraordinary life.

As an MC Shane is witty and professional. He is one of the most in demand celebrity MC’s in Australia today having hosted hundreds of events, conferences and awards shows. With his diverse background, he brings a rare depth of experience to every engagement. Many of Shane’s clients have him back every year!

This website uses cookies to improve your experience while you navigate through the website. Out of these, the cookies that are categorized as necessary are stored on your browser as they are essential for the working of basic functionalities of the website. We also use third-party cookies that help us analyze and understand how you use this website. These cookies will be stored in your browser only with your consent. You also have the option to opt-out of these cookies. But opting out of some of these cookies may affect your browsing experience.
Necessary Always Enabled
Necessary cookies are absolutely essential for the website to function properly. These cookies ensure basic functionalities and security features of the website, anonymously.
Functional
Functional cookies help to perform certain functionalities like sharing the content of the website on social media platforms, collect feedbacks, and other third-party features.
Performance
Performance cookies are used to understand and analyze the key performance indexes of the website which helps in delivering a better user experience for the visitors.
Analytics
Analytical cookies are used to understand how visitors interact with the website. These cookies help provide information on metrics the number of visitors, bounce rate, traffic source, etc.
Advertisement
Advertisement cookies are used to provide visitors with relevant ads and marketing campaigns. These cookies track visitors across websites and collect information to provide customized ads.
Others
Other uncategorized cookies are those that are being analyzed and have not been classified into a category as yet.
SAVE & ACCEPT
Powered by

All temporary structures will be professionally designed, structurally sound and will contain reasonable provision for:

Designers and builders have an obligation to design and construct to these principles and any relevant standards or legislation while meeting the special needs of their client. Parts of these principles include: