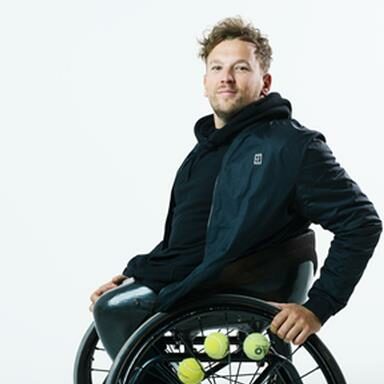 Not many people can lay claim to being a Paralympic gold medallist and world champion whilst still being in their teenage years. Then again, there aren’t many people like Dylan Alcott AO.

Australian of the Year 2022, Dylan Alcott AO, a dual sport athlete, has represented Australia on the international stage in both wheelchair basketball and wheelchair tennis since the age of 13.

In 2008, at the age of 17, Dylan was a member of the Australian wheelchair basketball team, The Rollers, won gold medal victory at the 2008 Paralympic games in Beijing. Dylan became the youngest ever wheelchair basketball gold medallist in history. At the 2016 Rio Paralympics Dylan Alcott won gold in both the singles and doubles tennis making him one of an elite few to have won Olympic gold in two different sports at two separate Olympics.

Dylan was born with a rare type of tumour wrapped around his spinal cord, which required immediate surgery only weeks after birth. After a three-year battle for his life, Dylan defied the odds and through sheer determination and hard work, he has been able to strive to become one of Australia’s best and widely recognised Paralympians.

One of Dylan Alcott’s greatest achievements was being inducted as a member of the Order of Australia in 2009 at the age of 18. From there, Dylan and The Rollers followed up their win in Beijing with victory at the 2010 FIBA World Championships, becoming the first Australian basketball team to ever win the title. At the tournament, he was selected in the World All Star 5, making him the best player in his position in the world. In 2012, he returned from the London Paralympic Games with a silver medal.

In 2013, Dylan re-launched his tennis career, and was granted a wild card into the 2014 Australian Open, reaching the semi-final. After only 18 months into his comeback, Dylan won his first ever grand slam title, The Australian Open, and is currently ranked number one in the world.

Dylan made sports history in 2016, as the first wheelchair athlete to win the Newcombe Medal, the highest individual award in Australian tennis. Dylan won Gold in both the singles and doubles tennis at the 2016 Rio Paralympics, was the winner of the 2016 Australian Open and awarded the winner of the 2016 GQ Sportsman of the Year. In 2021, Dylan Alcott won his seventh major consecutive Australian Open title, and he has won 15 grand slam singles titles to date. In 2021 winning his third straight French Open quad wheelchair singles title and second Wimbledon title. Dylan won Gold in the Men’s Singles and Silver in the Men’s Doubles at the 2020 Tokyo Paralympics consolidating him as the greatest player in wheelchair tennis history. In 2021, Dylan Alcott OAM became the only male in any form of tennis to win the Golden Slam, winning the Australian, French, Wimbledon and now US Open Championships, together with his gold medal from the Tokyo Paralympic Games. He joins Steffi Graf, who in 1988 is the only other person in history to do so.

Dylan’s achievements are not only restricted to the sporting field. In 2017, Dylan created the Dylan Alcott Foundation, a foundation to help young people who are struggling to come to terms with their disabilities. The foundation aims to improve quality of life through mentoring, scholarships and grants which assists individuals to be involved in education and sport. Dylan is also an entrepreneur, and is the co-founder of Get Skilled Access, a training provider educating corporates and governments on how to better understand and treat customers with disabilities. He was also nominated for 2017 Young Australian of the Year and in 2022 was awarded Victoria Australian of the Year.

Dylan Alcott is a keen philanthropist, and broke the world record playing wheelchair tennis for 24 consecutive hours non-stop, setting the new world record and raising an incredible $100,000 for two charities.

Dylan’s true passion is his work as a motivational speaker, and through his inspirational storytelling, he is continually trying to alter and change the way people with disabilities are perceived in the wider community. He works as a keynote corporate speaker, bringing disability awareness to schools. He also works extensively in the Australian media landscape, regularly making appearances on Channel Ten’s The Project and Channel 7 Sports, and is a former Triple J Radio host.

In 2018, Dylan Alcott published his autobiography, Able – Gold Medals, Grand Slams and Smashing Glass Ceilings. He is also the founder of Able Foods, a purpose led business providing great quality food and opportunities for people with disability to lead healthier and happier lives.

Dylan Alcott was appointed an Officer of the Order of Australia (AO) in 2022 for distinguished service to paralympic sport, particularly to tennis, and as a role model for people with disability, and to the community through a range of organisations.

This website uses cookies to improve your experience while you navigate through the website. Out of these, the cookies that are categorized as necessary are stored on your browser as they are essential for the working of basic functionalities of the website. We also use third-party cookies that help us analyze and understand how you use this website. These cookies will be stored in your browser only with your consent. You also have the option to opt-out of these cookies. But opting out of some of these cookies may affect your browsing experience.
Necessary Always Enabled
Necessary cookies are absolutely essential for the website to function properly. These cookies ensure basic functionalities and security features of the website, anonymously.
Functional
Functional cookies help to perform certain functionalities like sharing the content of the website on social media platforms, collect feedbacks, and other third-party features.
Performance
Performance cookies are used to understand and analyze the key performance indexes of the website which helps in delivering a better user experience for the visitors.
Analytics
Analytical cookies are used to understand how visitors interact with the website. These cookies help provide information on metrics the number of visitors, bounce rate, traffic source, etc.
Advertisement
Advertisement cookies are used to provide visitors with relevant ads and marketing campaigns. These cookies track visitors across websites and collect information to provide customized ads.
Others
Other uncategorized cookies are those that are being analyzed and have not been classified into a category as yet.
SAVE & ACCEPT
Powered by

All temporary structures will be professionally designed, structurally sound and will contain reasonable provision for:

Designers and builders have an obligation to design and construct to these principles and any relevant standards or legislation while meeting the special needs of their client. Parts of these principles include: